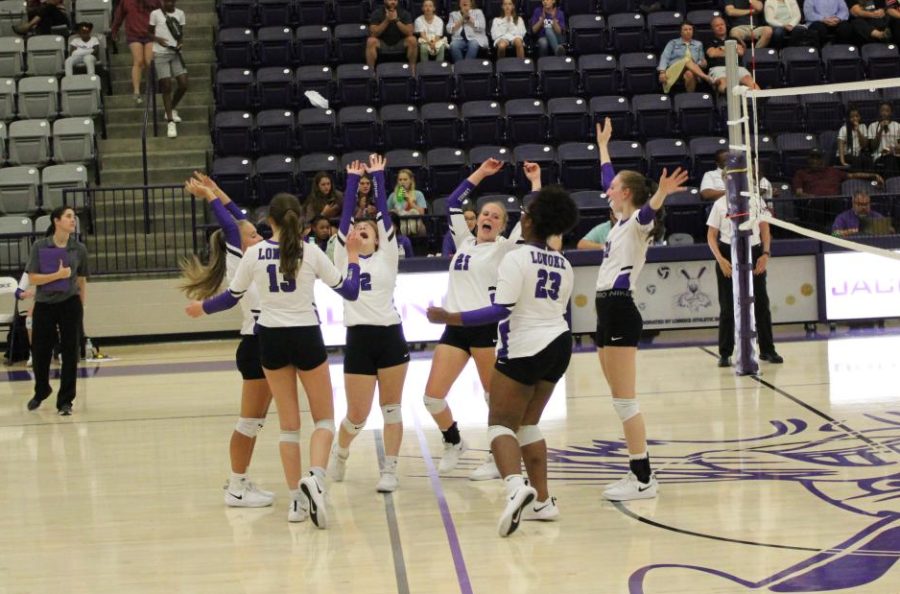 This Tuesday, the Lonoke Lady Rabbits Volleyball Team played their first conference game against Robinson with the theme of White Lies or Whiteout for the student section. Despite the tough grit displayed, the rabbits were faced with a quick defeat in 3 sets. The first set started with a strong 6-3 lead for the lady rabbits, however, Robinson had a few tough servers that lead the senators ahead. The morale of the rabbits had been attacked and Lonoke Volleyball struggled to win back the set. Head Coach Emily Southerland spoke about the service receive struggle in their timeout. “We are jumping to pass balls flying 50 feet out. The server has only managed to get two good serves actually in the court. We need to communicate and have court awareness,” Southerland stated.

The lady rabbits went into the next set with damaged spirits that started the score in favor of Robinson. The rabbits attempted to come back and brought the score closer. Lonoke was still behind at 16-18 in this set, but they fought the Robinson offense with some great digs and hustle. Senior Jodi Coleman had a quick save that prevented the senators from scoring and then attacked the third hit as a back row hit that resulted in a kill for the rabbits. When describing her gameplay Tuesday, Coleman explained, “I felt that I could have done better passing, but I was proud of my back row hit. We worked on back row attacks in practice that morning and it helped me get that kill.” However, the grit was not enough to win the set, so Robinson took set two.

In set three, Lonoke fought back and brought the energy. Senior Maleah Behrens accumulated three blocks and Sophomore Brooklynn Meredith collected four kills for the rabbits on the right side. Meredith explained her thoughts on the third set and the new vivacity among the court. “Having a good attitude on the court helped the whole team while the whole team helped me with their positivity and encouragement,” Meredith exclaimed. Despite this fight, Lonoke’s serve receive errors gathered many points for Robinson. The score was 19-23 in favor of the senators when the rabbits called their last time out. “We are playing in our heads,” Coach Southerland expressed, “We just need to calm down here. Take a breath, go out there, and play volleyball like we know how to do.” Lonoke was able to fight for the score of 21-24, but a serve receive error caused the Robinson Senators to take the conference game.

The loss was heartbreaking for Lonoke and the rabbits were feeling the defeat of their first conference game as they high-fived the senators after a good game. Before the teams could go to their locker rooms, Coach Southerland had Lonoke run seven lines in a specific time frame to punish the many errors of the game. The Lonoke Volleyball Team felt the tough loss and will work on the mistakes in their minds as they play their next conference game against Morrilton this Thursday, September 14th.